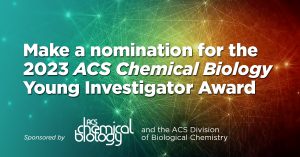 The lectureship will be administered jointly by the Editor-in-Chief of ACS Chemical Biology, Chuan He (University of Chicago) and the ACS Division of Biological Chemistry. The award will consist of a specially designed lectureship hosted by the Division of Biological Chemistry, a cash award, plaque, and travel expenses to the meeting. A symposium honoring the awardee will consist of invited speakers, a short award presentation, followed by the award lecture.

Nominations are submitted via a secured online form at the link below. All materials must be submitted by October 2, 2022. The selection committee consists of three individuals who were jointly chosen by the Editor-in-Chief of ACS Chemical Biology and the Chair of the ACS Division of Biological Chemistry.